Are You a Middle Grade Fiction Author? {Interviews with a 10 Year Old}

An Interview with a 10 Year Old

In which I interview my son, who while you might NOT catch him putting books above his love for video games, is a bookworm at heart.

Melyssa: What made the Redwall by Brian Jacques or The Chronicles of Narnia series by CS Lewis so engaging? (Do you know that word means?)

Melyssa: It means you can’t stop reading, even if you want to.

G: It was the right amount of action and drama – lots of drama! That’s one of the things I liked about it. For the first couple chapters of the first book you might not be into it so much, but once you get into it, it really starts getting interesting, in a very dramatic way. It’s a little description … descriptionary about the gore. Sure, there’re talking mice that try to kill rats and other things, but it’s an over-all good series.

Melyssa: Do you like cliff hangers at the end of each chapter or do you find them annoying?

G: I like them! It makes you want to keep reading and that’s why I got through the series so fast. Every end of every chapter and every book was a cliff hanger. Which is what I like the best. It compels you to keep on reading!

Melyssa: Do you like short chapters or long or a little bit of both?

G: The long ones usually have lots of action but the short ones usually leave you in suspense. Some of them are middle-length and those usually have a lot of questions that will be filled in later. It depends, but most of the time I like the long ones with lots of action and it’s a good way to put lots of comedy and action and drama. But I like the short ones too because it keeps you reading. I like books that are glued to your fingers.

Melyssa: What about illustrations? Do you need pictures in your books? Even the little ones at the beginning of the chapters, or do you not care?

G: I like the little ones at the beginning of the chapters because if it is a confusing chapter it makes more sense. And sometimes they’re super epic pictures! But you don’t have to, because when I first started reading I wouldn’t read anything without pictures but Brian Jacques made me not care about that. Just like poems or songs, drawings and illustrations aren’t important, but they’re fun and they attract more people. If you are writing a book you need at least a couple drawings.

Melyssa: The Redwall series was 22 books and now you’re onto Percy Jackson and the other Rick Riordan books. How many books is too many in a series?

G: Honestly, if they were the same amount of interesting and compelling writing like Brian Jacques (rest in peace), I would say 20-25 is perfect, anything over that is overkill.

Melyssa: So what about stand alone books? With no sequels?

G: It better have a good conclusion!

Melyssa: How are the movies after you’ve read the books?

G: Okay, Howl’s Moving Castle sucked. Narnia did a good job and they were similar but they didn’t finish. The one Redwall movie was like, half the book and it didn’t even give a conclusion!

Melyssa: So, you’re ten years old. Is that too young for romance in your books?

G: It’s happened in a couple books that I’ve read and as long as you don’t do it too much (like kissing), it’s okay. Kissing on the cheek is okay, I guess. Anything more than that is too much for me! Muses for a bit … But I guess it shows that the characters can be warriors and be tough but they can still be kind so I guess that’s cool.

Melyssa: What makes you bored when you’re reading?

G: Infinity War, Mom. He tried to wipe out half the universe. He wasn’t very balanced, even though he was obsessed with it.

Melyssa: What makes you keep reading when Mom says to go to bed?

G: The right amount of cliff hangers and it depends on the book. If I was reading, Howl’s Moving Castle, or you only had one book of Narnia, if it wasn’t very compelling and kind of boring, I probably wouldn’t like it. 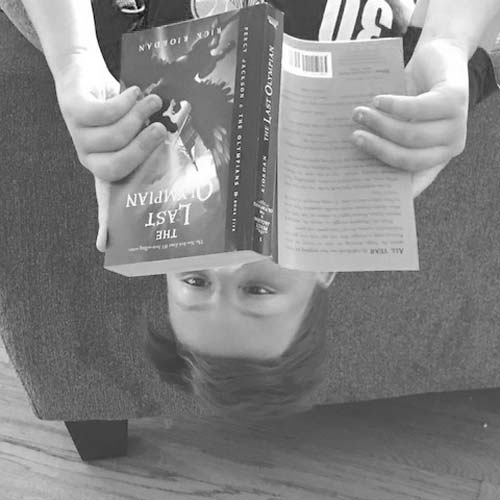 Melyssa: How do you feel when a main character is killed off in a dramatic fashion?

G: It had better be worth it! Sometimes my favorite character dies in books; like in Percy Jackson [spoiler alert], a character named Zoe died and she was killed by her father, aka Titan, Lord of the Sky, and if it didn’t have the right amount of tears and tear jerking moments then it wouldn’t’ be a good book.

Melyssa: So it’s okay to kill someone if it keeps you reading?

G: If they die with a purpose and it’s for the goodness of the book and the greater good and they will be remembered, then yes. But there had better be a good reason or I will chuck it out the window!

Melyssa: When you’re reading do you do the accents and the voices in your head?

G: Yes! Redwall has a lot of Scottish accents. They say tae a lot.

Melyssa: What does that mean?

Melyssa: So if someone wants to write a good book for a ten year old, what should they include?

Melyssa: Is there anything you HATE in a book?

G: Sometimes I think I’m hating something in a book and I get really mad, but if it’s an experienced author and they know what they’re doing, then they’re going to change my mind. But I’m not dissin’ on unexperienced authors. They’re probably doing the best they can. They should probably take classes or something. 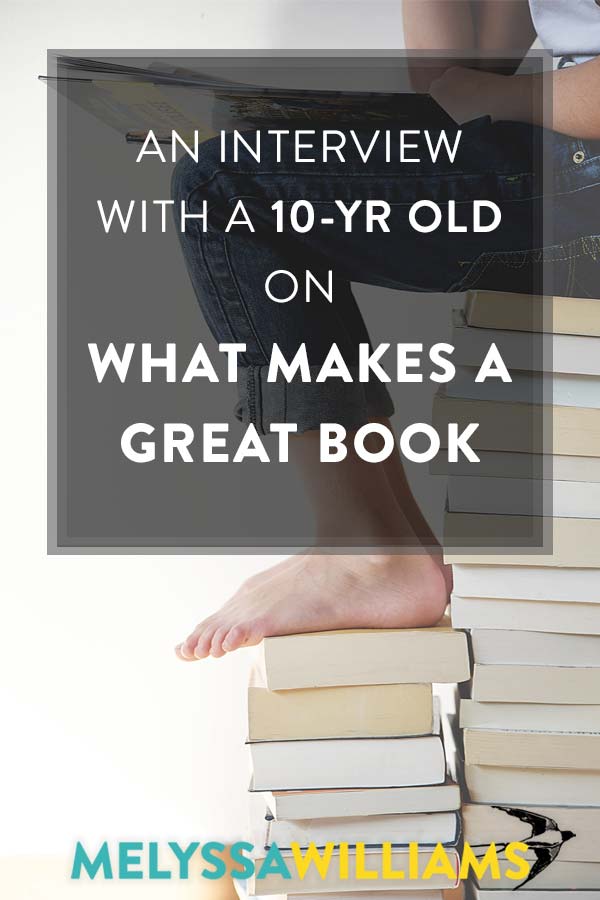