The latter pair of whom have my heart forever.

Our story takes place in Santa Carla, unofficial murder capital of the world, where Grandpa (Barnard Hughes) resides, with his penchant for taxidermy, double stuffed oreos, the TV guide, and a pining love for the Widow Johnson.

Diannie Wiest, Mother to Us All in Our Dreams, is recently single and moves back in with Dad along with her two boys, Sam (Corey Haim), and Michael (Jason Patric).

While Michael is mooning and being angsty, but also super hot, Sam wanders down to the boardwalk, where it turns out, people have been disappearing at an alarming rate. There he meets up with the Frog Brothers, Edgar and Alan, played by Corey Feldman and some other kid. 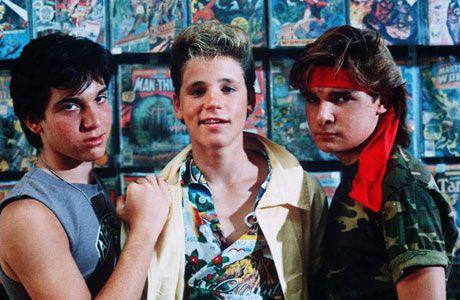 Who put that guy in the left in my photo of my Coreys? 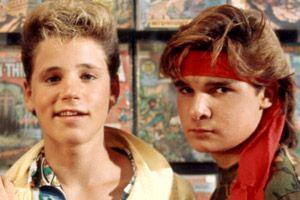 Anyway, while Sam is buying comics and Edgar and Alan offer him their protection from vampires, Michael gets smitten as a kitten by the lovely and bodacious Star, played by Jami Gertz.

The girl has hair that appears to have been teased by a tornado, permed by a small child, and given a ride through a swamp in Mississippi on a highspeed power boat, but damn … 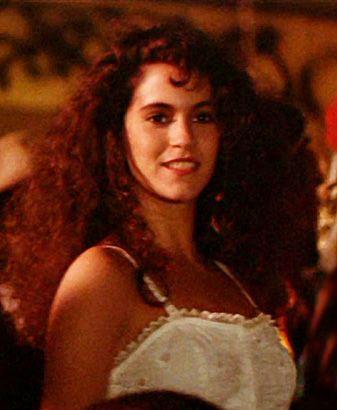 She makes it look good, doesn’t she?

Star flirts a little, but ends up leading poor lovestruck Michael straight into the line of sight of the bad boy to end all bad boys, David, played by Keifer Sutherland.

With an earring collection to rival a preteen class at an all-girl’s middle school, David and his band of lost boys are as dreamy as all get out. 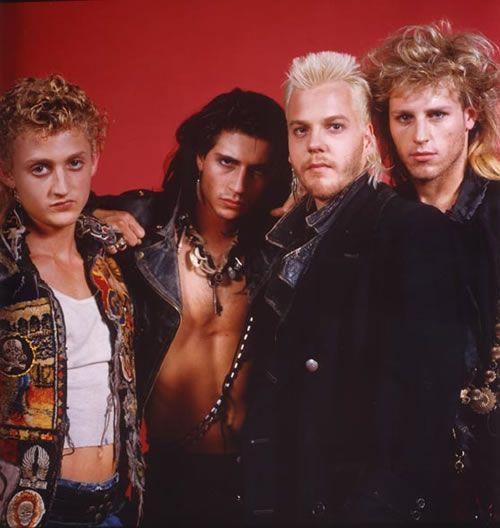 And do you see something? They don’t sparkle.

Okay, it was the ‘80s, there might have been a little sparkle but only from Star’s Caboodle kit they probably used to store their guyliner.

Peer pressure strikes poor Michael hard. All he wanted was some lovin’ from Star, and suddenly he’s taken up with some undead thugs. Don’t pretend like it’s never happened to you.

Hurtling through the air on some gnarly bikes, they all make Michael feel like he’s being a big baby when he doesn’t want to drop off a bridge with them. 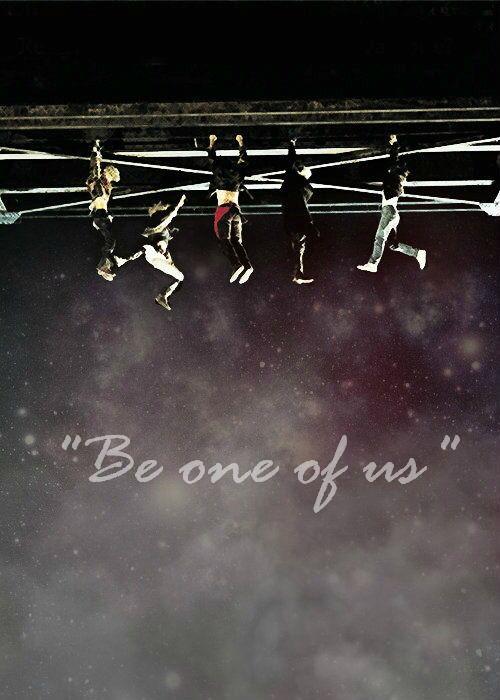 Parents, be aware of the peer pressure that teenage vamps put on your kids these days.

Beginning to think these guys are serious douchebags, Michael nevertheless persists in following them around, because … Star. 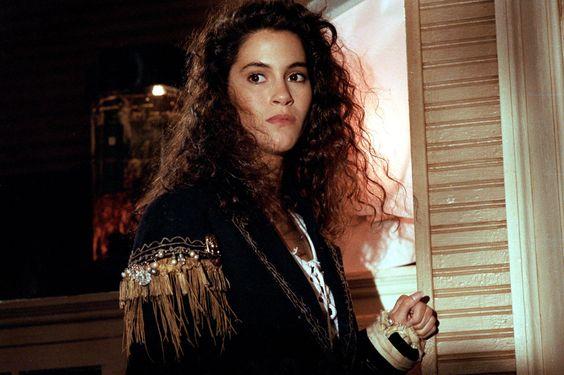 Her and her padded fringed shoulder pads have bewitched him, body and soul.

He didn’t stand a chance.

In the meantime, Mom (Lucy) gets a job at a video store, where her boss is the grandfather from Gilmore Girls. Grandpa Gilmore owns a giant dog and works the night shift. He also has a thing for Lucy and wants to take her out on a date.

Who can blame him? Dianne Wiest is the cutest thing since butterfly babies. 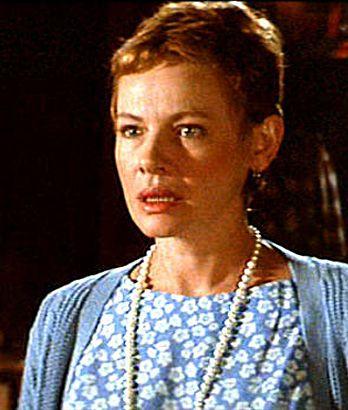 Even while wondering what her wayward sons are up to, she manages to look adorable.

The night on the boardwalk ends with Michael drinking a very large bottle of what is most definitely not red wine.

Dude, they literally said it was blood. Have you got Aqua Net in your ears, boy?

That’s not the worst of it though because then they order some Chinese. Actually, they must have picked it up on their bike ride because I don’t think the Peking Palace delivers to the bat caves. 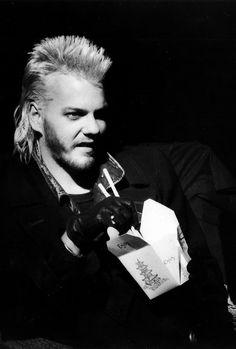 When watching this film, it’s very important to watch it while eating maggots noodles. 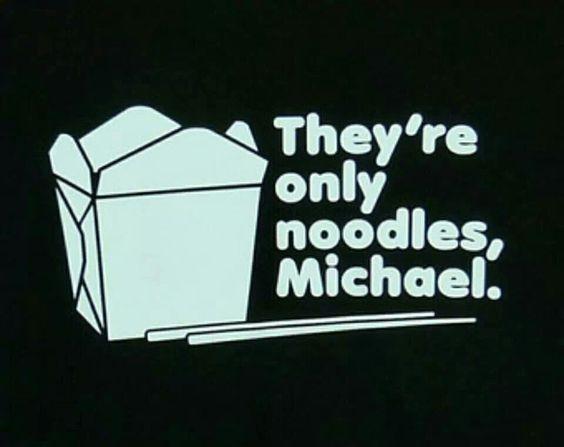 Anyway, back to Santa Carla. The Frog brothers, plus Sam, are starting to get real suspicious-like of Michael, who has been listless, sleeping all day, piercing his ear, wearing sunglasses in the house, and other young adult shenanigans.

Lucy, too, is starting to get a little pissy, or as pissy as Dianne Wiest possibly can get, which is to say not very pissy at all, but still. Worse yet, Michael develops a serious dairy intolerance and spills milk all over the kitchen floor without even cleaning up his mess.

Dianne is going to be so mildly distressed when she gets home from her date with Grandfather Gilmore.

Sam’s suspicions that his brother is a bloodsucking, undead, leach are confirmed when Michael first tries to attack him while singing in the bath, then floats up to the second story window.

Way to blow your cover, Michael, have some more not-wine and get your act together. 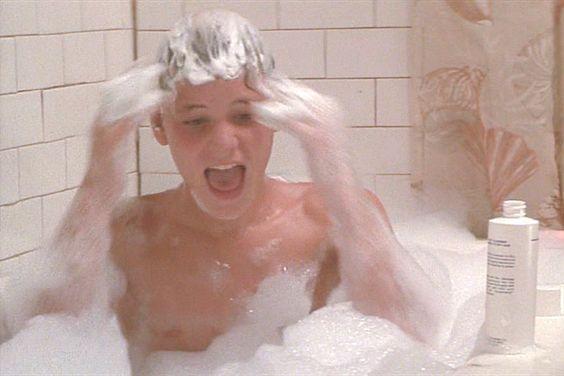 Nanook, Sam’s dog, saves the day, but now Sam is pretty sure he knows what his big brother is. 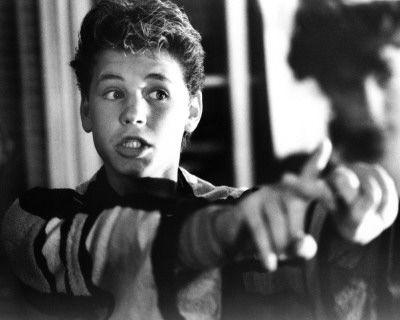 Sign of the cross, holy water, garlic, Sam and the Frog Brothers start getting ready for battle.

After some serious soul searching – or what’s left of his soul – Michael decides he doesn’t really want to suck blood out of the living, at least not until he’s finished high school, and he romantically swoops Star off her feet, both literally and figuratively.

Figuratively because it’s the right thing to do as her new boyfriend, and literally because it’s daylight and she can’t seem to wake up. Side effect of vampire life (also teenage life).

Taking her and one small kidnap victim, Laddie, along for the ride (because what’s a pesky child endangerment charge after all these larcenies anyway?) they prepare to fight Keifer and his team of long-haired lovelies to the death

However, feeding Grandpa Gilmore huge heaps of garlic, tossing holy water at him, and forcing him to look in a mirror, only result in Gramps getting his feelings hurt and leaving in a huff.

So much for that theory. 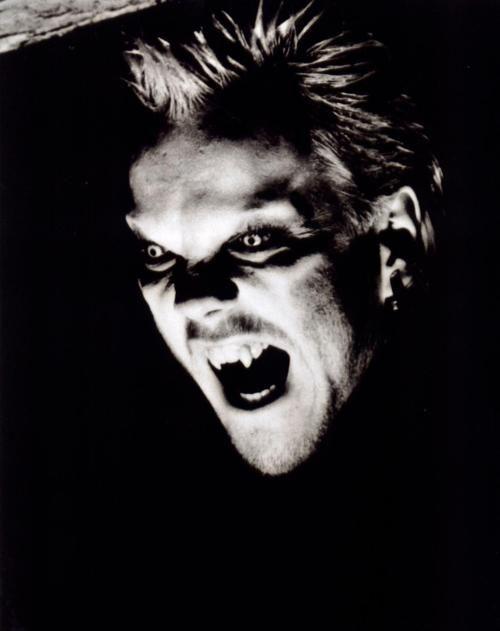 David is not pleased with the turn of events. First, Michael won’t eat his noodles, then he steals his girlfriend.

Not cool, Michael. Gonna have to eat you. 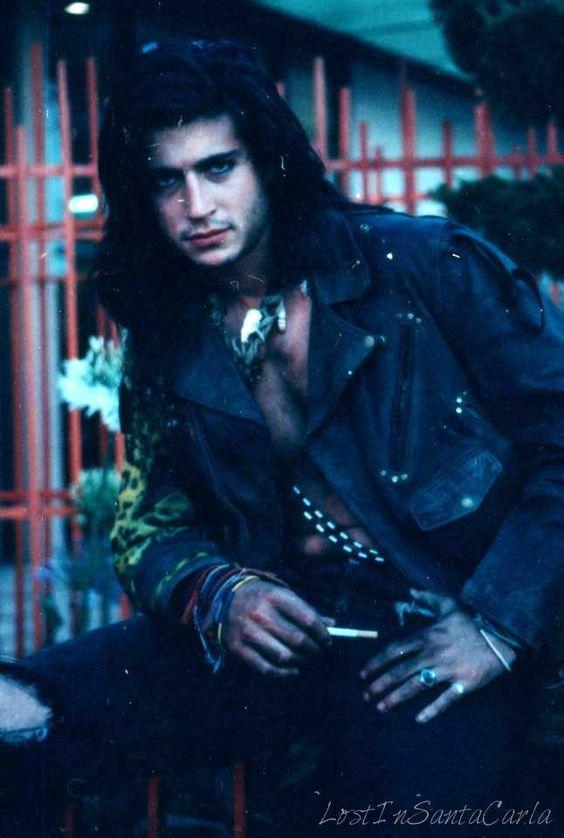 Dwayne, however, manages to stay pretty calm, cool, collected, and ever so nice to look at.

(Wouldn’t throw him out of bed for eating crackers. Noodles. Whatever.)

The battle begins and it’s a blood bath. It’s a little like Gremlins, except no one puts a vampire in the blender. Instead, they impale them, melt them in a tub of church water, and kill them by stereo.

Let us mourn the loss of these beautiful misguided boys.

Who could have led them so far astray?

Grandfather Gilmore, that’s who! Yeah, he got around all those tests because not-too-bright-but-oh-so-cute Michael invited him in the house.

At this point, Star is probably thinking she made the wrong choice in the boyfriend department, but she’s loyal, and also she has her hands full with Laddie, who makes the unfortunate decision to stop resisting his vampire inclinations and goes all Eddie Munster on her. 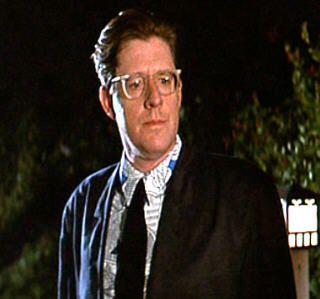 Don’t ever invite a vampire into your home, you silly boy, it renders you powerless. 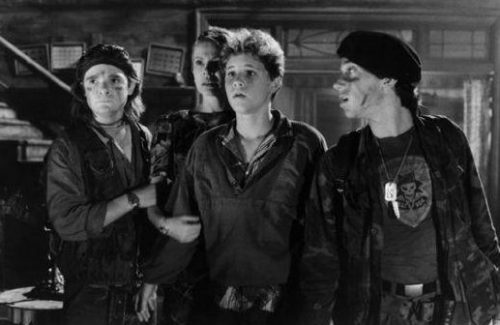 Michael, realizing he really messed up this time, finds some major cojones and inner strength and takes on Grandpa Gilmore. Having only been a vampire for like two days, and a half-vamp at that, he somehow manages to wipe the floor with Grandfather Gilmore eventually. 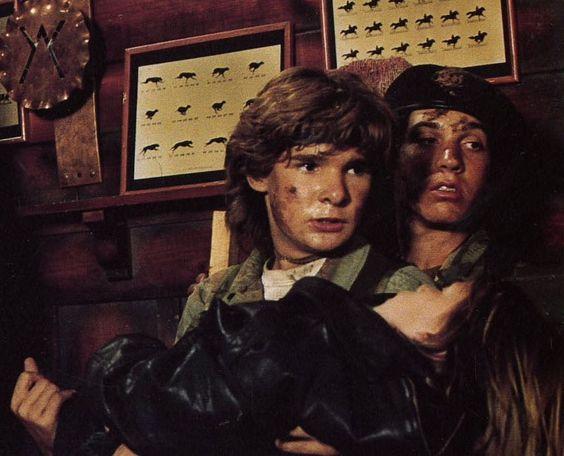 Who gets custody of Eddie here?

Dude, I have my hands full with these two idiots. Not it.

Grandpa (not Gilmore) gets the last word at the film, rifling through his blood covered fridge, looking for some double stuffed Oreos.

Only one thing about Santa Carla I never could stomach. All the damn vampires.

And there you have it, one of the best flicks ever made. In the ‘80s and any other decade. Crank up your Doors music, fluff up your shoulder pads, and watch it again and again and again. 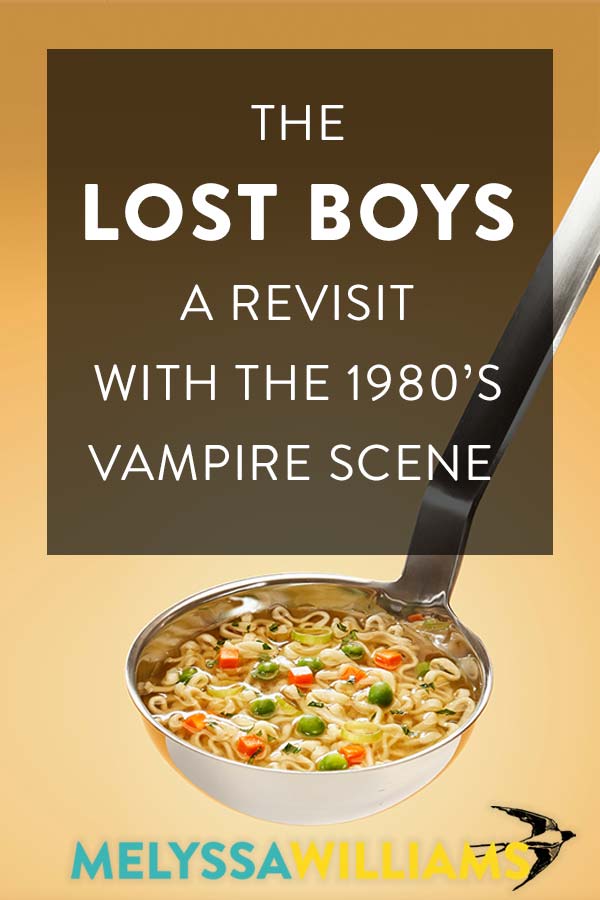 How to Train Your Writer: A Helpful Guide for New Owners

Should I Outline My Manuscript? Pros and Cons