Why Every Kid Should Have A Pony

When I was young – back in the olden days, by crikey – I longed for a pony. My longing would not be fulfilled by roly-poly bugs named Juan, or stray cats that refused to cuddle, or the occasional frog that was captured, named, snuggled, and played dead at all the wrong times.

You can’t even purchase saddles for pets that small, for goodness sake, much less ride off into the sunset, ponytails waving in the breeze.

No, what I needed was a pony. A mighty steed, a classy mount, a real life, by golly, horse. One that I could tie my saddlebags filled with peanut butter and jelly sandwiches to, and gallop off to have amazing adventures.

I’d read Pippi Longstocking, National Velvet, Black Beauty, and Little House on the Prairie, and my own equine adventures were not far behind. I knew it.

I saved all my money. I said no to the allure of the candy aisle when shopping with Mom. I turned an eye to the ice cream truck, lest I be tempted. I gave up chewing gum and sticker collecting and all those things that my mean parents wouldn’t pay for, and I stacked my grimy one dollar bills together until they were high enough to buy my pony. 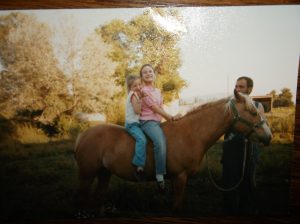 My little sister, me, Cherokee, and my father, who is inexplicably wearing overalls with no shirt. I apologize.

My Cherokee was a mighty stallion, a fierce and loyal sidekick. A sophisticated and intelligent gentleman of the Palomino variety.

Actually, no he wasn’t.

He was kind of a brat, and by “kind of,” I mean really, really a brat. His favorite antics were walking out the middle of the pond with me atop his back, shouting, “Nooooooo, Cherokee! Bad horse! Turn! Stop! Halt! Ack!” and then standing there stubbornly for minutes hours, until I sadly climbed off and swam to shore.

He also loved to stand in front of his water trough and kick in it until we were both thoroughly drenched, chuckling maniacally all the while, and twirling his handlebar mustache with his hooves.

His other favorite trick was refusing to be caught all day long, as he scampered around the pasture with the reckless abandon of a two year old toddler hyped up on sugar, while I ran behind, choking for breath, and waving my (unused) halter in the air. Sometimes I would hide the halter in my shirt and come at him with sugar cubes; you know, all casual and subtle-like. He was too smart to fall for that though.

It’s a little known fact that horses don’t eat sugar cubes; they feast off the tears of disappointed little girls.

Anyway, every kid should have a pony for their adventuring. But probably not Cherokee.

The Educational Value of a Horse

My parents were homeschooling me at the time, and I think they figured that this horse business covered several school subjects:

Not to mention the chores! Letting your child have a pony is a sneaky way to introduce your offspring to major amounts of chores.

Cherokee was our After School Special, our Extra Curricular Activity, and our Science Project all rolled into one.

Oh sure, you can enroll your kids in soccer or ballet or harp lessons, but those won’t teach you nearly as much about perseverance, self-control, safety, patience, and a sense of humor like buying them a horse will.

Plus, you won’t have to drive them to their extra-curricular activity; you can just send them outside. It’s a win-win really.

After a few years of owning Cherokee and finally coming to the realization that he was never going to be my magnificent steed and that National Velvet had set me up royally, we sold him to a nice Amish family where he lived out the rest of his days teaching their youngsters to swim through ponds and get plenty of cardio, and my sister and I went back to more normal experiences with the Arts.

We started our own homeschool theater group, ate up ballet like it was going out of style, picked up (and put down) flute and piano lessons, and did all the other kid stuff we were told we needed to do.

We never became actors of the highest caliber, prima-ballerinas at the Bolshoi, or tickled any ivories at Carnegie Hall, but the lessons we learned as children from our Elective courses stayed with us throughout the years.

Namely these: sugar cubes are wasted on stubborn ponies, peanut butter and jelly sandwiches don’t taste good when they’re soggy from pond water, and you can’t teach an old Palomino new tricks (or really any old tricks either).

So, if you’re looking for unconventional ways to get your kids out of the house in the summer, or find something for them to do after school, or teach them a valuable life lesson, I would recommend volleyball, karate, culinary arts, or polo lessons. Whatever you do, don’t buy them a pony. 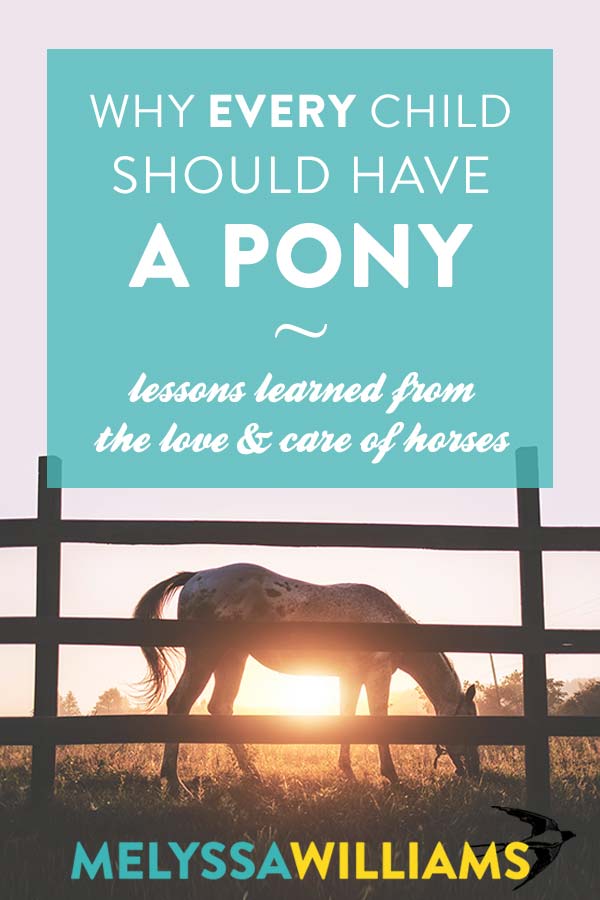 What To Read Next If You Love Outlander