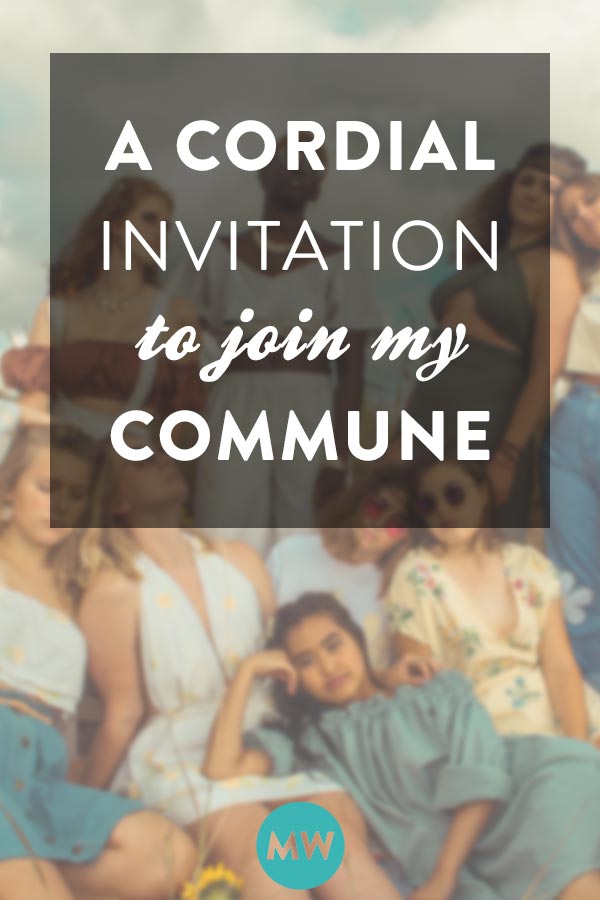 The 10 Rules for My Commune, and a Cordial Invitation to Join

I crave simplicity and the homesteading life – this in spite of the fact that I can kill a house plant in six seconds flat and have never milked a cow.

Regardless of such a fact, I’ve decided to start my own commune.

My public-schooled, executive, non-religious brother already thinks I live in one anyway and he phones occasionally to make sure I am not wearing long dresses, marrying off my small daughters, allowing my husband extra wives, watching for comets, and drinking Kool-aid. (I stay mum.)

Of course there will have to be some rules in my commune. This isn’t a free for all! Breaking the rules will terminate our weird, crunchy, granola, hippy-dippy way of life, so try to adhere.

1.  No sports. Well, you can play them, but no watching them on TV.

2.  There will be an outdoor movie shown every weekend in the warm months and I get to pick the movie. Yeah, that’s right, every week, my pick, no whining and complaining and making fun of the movies I like. You want to pick one? Go start your own commune. We’ll get together for barbeques and such.

3.  I’m not much of a gardener so if one could make sure you are, that’d be great.

4.  Small children will be allowed to run around in their birthday suits. No larger humans though – that’d be awkward. We don’t want our commune to end up on the evening news.

5.  Tie-die in moderation only, please.

7.  There will be lots of music playing, for enjoyment and also to fulfill our hippy-dippy minimum requirements. I plan to learn the fiddle. You can play whatever you want. I’m thinking of seeing if Steve Martin wants to join my commune. Also, Ritchi Sambora. And if he happens to bring his best friend along, well, it’s a friendly commune…can’t exactly just kick the guy out…oh OK, Jon Bon Jovi, you can stay!! Gosh, you don’t have to beg, silly man, we’ll find a place for you somewhere, don’t you fret. You’ll look great in my library. Hey, you like Fred Astaire, don’t you? Do you think I look like Audrey Hepburn? Do you –

9. We’ll eat things like wild mushroom ragu…goat cheese frittata…pancetta risotto… I’m so excited! No iceberg salad with pink tomatoes, no flavorless spaghetti, and, hold onto your hats, Mommies, no chicken nuggets. I know, I know, I had you at wild mushroom ragu, right?

10.  We’ll probably have to homeschool because, let’s face it, we’ll be in the middle of nowhere and besides, homeschooling is a kind of commune thing to do. But we should rotate. I’ll teach umm, hiking, and fairy tales. And you can teach math, algebra, science, geometry, and chemistry. That seems fair. Ahem. 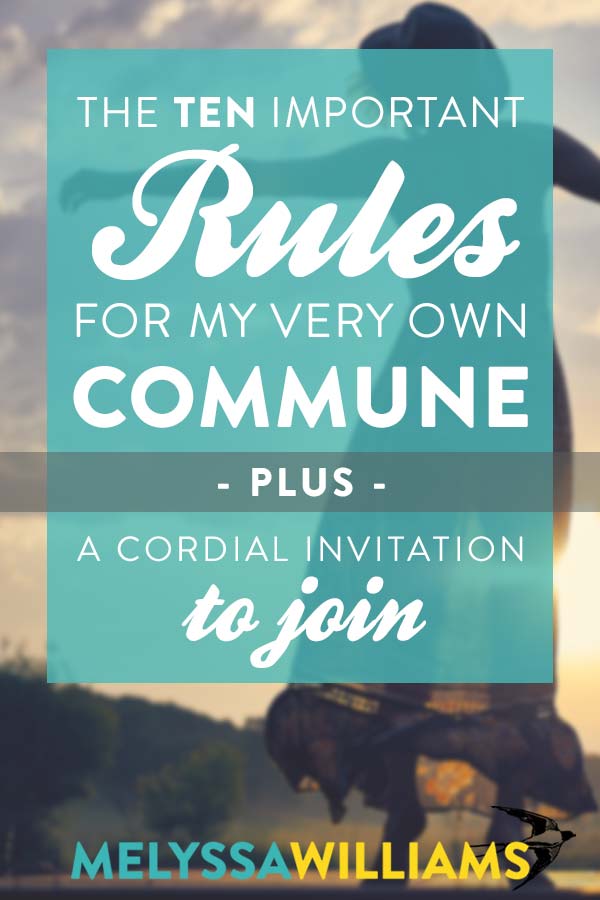